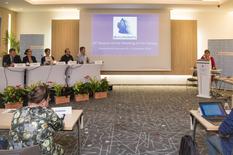 Isabelle Rosabrunetto, Director General of the Ministry of Foreign Affairs and Cooperation,draws the 8th Meeting of the Parties to the Agreement on the Conservation of Populations of European Bats to a close © Government Communication Department/Stéphane Danna

On Wednesday 10 October, Isabelle Rosabrunetto, Director General of the Ministry of Foreign Affairs and Cooperation, closed the 8th Meeting of the Parties to the Agreement on the Conservation of Populations of European Bats (EUROBATS), which was chaired by Monaco.

In light of the significant number of resolutions adopted, Ms Rosabrunetto first congratulated the participants on the work accomplished over the course of the three days.

She noted that this had been a particularly important session for EUROBATS, notably with respect to the resolutions reflecting the numerous challenges the parties are facing as they seek to reconcile economic development and bat conservation.

The Director General also highlighted the spirit of cooperation and compromise demonstrated by participants, which contributed to the event’s successful outcomes.

Finally, having thanked the Agreement Secretariat team, Ms Rosabrunetto invited participants to join her in expressing gratitude to Andreas Streit, who has served as the Executive Secretary of EUROBATS for 20 years, adding: “I think I am speaking for everyone when I say that without you, EUROBATS would not be what it is today: a large family of dedicated individuals.”