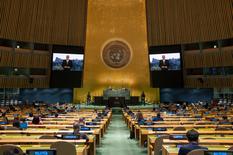 The General Debate of the 76th session of the United Nations General Assembly was held from 21 to 27 September 2021, with heads of state and government sharing their message in a hybrid format for the first time.

H.S.H. Prince Albert II participated virtually, and highlighted His Government’s diligent and committed management of the health crisis, and the support that had been given to people and businesses in the Principality. He also expressed his wish to see a green, sustainable and nature-based post-COVID reconstruction. In addition, H.S.H. the Sovereign Prince stressed the importance of multilateralism, the development of digital technology, the contribution of sport to achieving the Sustainable Development Goals (SDGs), and the fight against climate change and to protect the oceans.

On 20 September 2021, an event titled “Spotlight on the SDGs” provided an opportunity for the UN Secretary-General to launch five appeals for urgent action: ending the pandemic, notably through setting a target to vaccinate 70% of the global population by mid-2022; investing in a sustainable and equitable recovery; guaranteeing equal rights for women and girls; committing to achieving zero carbon emissions by 2050; and raising 100 billion dollars a year for action on climate. There was a particular focus on young people at this event, which was attended by the Special Envoy for Future Generations and Culture, and by Korean pop group BTS (Beyond the Scene).

On 23 September, the UN Secretary-General convened an initial Food Systems Summit to address five areas of action, with the aim of raising global public awareness on the way in which we produce, consume and view food. The event offered a chance to mobilise the international community and reaffirm everyone’s determination to combat famine and malnutrition. Minister of Foreign Affairs and Cooperation Laurent Anselmi reiterated the Principality’s commitment to implementing SDG 2, the Decade of Action on Nutrition and the Decade of Family Farming. He also announced Monaco’s support for the School Meals Coalition – Nutrition, Health and Education for Every Child, formed under the aegis of the World Food Programme (WFP).

The efforts of the international community to secure a nuclear-free world were highlighted at the Twelfth Conference on Facilitating the Entry into Force of the Comprehensive Nuclear-Test-Ban Treaty (CTBT) on 23 September, and during the International Day for the Total Elimination of Nuclear Weapons on 28 September.

Finally, on 24 September, the High-Level Dialogue on Energy was held. This was the first global gathering on this issue since the 1981 Conference on New and Renewable Sources of Energy. The aim was to step up ambition and accelerate action towards the achievement of SDG 7 on affordable and clean energy, and the event identified specific actions implemented by member states.

Monaco’s Permanent Mission to the United Nations also took part in several events devoted to the position of women, particularly in Afghanistan, the climate and biodiversity.