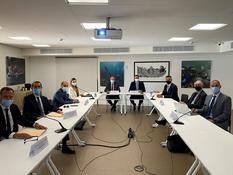 The Council of Europe’s Group of States against Corruption (GRECO) welcomes Monaco’s “seriousness” and “strong political will” on preventing corruption in respect of members of parliament, judges and prosecutors.

This is the conclusion of the Monaco Interim Compliance Report adopted by GRECO at a meeting held from 20 to 22 September on the 4th GRECO evaluation round in the Principality, relating to preventing corruption in respect of members of parliament, judges and prosecutors.

In the report, GRECO assesses that 11 out of 16 recommendations have been implemented satisfactorily and that five remain partially implemented.

GRECO highlighted the efforts that have been made by the Monegasque authorities since the previous report adopted on 6 December 2019, which assessed that only two of the 16 recommendations had been implemented.

Within a very short timeframe, the Principality has amended its legislation to meet the GRECO requirements. GRECO highlighted the significant progress made by the National Council as a result of the adoption of a new code of conduct and the appointment of an ethics advisor, and by the judicial system as a result of the reform of the status of the judiciary and the adoption of a compendium of ethical and deontological principles for judges.

A Monegasque delegation* was at the Oceanographic Museum for the adoption of the report, ready to answer questions from GRECO members and offer any clarification required.

* The delegation was led by H.E. Mr Remi Mortier, Monaco’s Ambassador and Permanent Representative to the Council of Europe (by video conference from Strasbourg) and comprised:

For the Department of Justice:

For the National Council:

For the Department of Legal Affairs:

The Monegasque authorities shared their determination to continue their efforts and thinking so that the next situation report, which is due to be sent to GRECO no later than 30 September 2022, will show further progress.

Following Monaco’s authorisation of its publication, the report is publicly available via the GRECO website: www.coe.int/en/web/greco

Established in 1999 by the Council of Europe to monitor member states’ compliance with the organisation’s anti-corruption standards, GRECO’s objective is to improve the capacity of its members to fight corruption by monitoring their compliance with Council of Europe anti-corruption standards through a dynamic process of mutual evaluation and peer pressure. It helps to identify deficiencies in national anti-corruption policies, prompting the necessary legislative, institutional and practical reforms. GRECO also provides a platform for the sharing of best practice in the prevention and detection of corruption.