“It is a pleasure for us to be hosting this event in Monaco [...] It speaks to the importance that we attach to the International Organisation of La Francophonie (IOF), of which the Principality of Monaco is proud to have been a founder, and of which we continue to be an active member and loyal supporter.” It was with these words that H.E. Serge Telle, Minister of State of the Principality, opened the two-day 36th Ministerial Conference of La Francophonie at the Grimaldi Forum today.

Before the representatives of the 88 states and governments who share the French language in common, as well as numerous Monegasque personalities, including Archbishop Mgr Bernard Barsi, government ministers Laurent Anselmi, Patrice Cellario and Didier Gamerdinger, and President of the National Council Stéphane Valeri, H.E. the Minister of State emphasised the Principality’s choice of theme for the conference: Reconciling Humanity and the Planet. “To save our planet, all of our energy, all of our determination and all of our resources must come together – can come together,” he said. “I mean those of the states and governments that we are representing here today, of course. But also those of civil society – and of young people in particular – of businesses, of NGOs, of intellectuals, artists and academics, indeed, of each of us... If we want to take effective action to protect our planet, we need to do it together. That is the point of the sustainable tourism event that we are hosting in the margins of this conference.”

His speech was echoed by the President of the 36th IOF Ministerial Conference, H.E. Zohrab Mnatsakanyan, the Armenian Minister of Foreign Affairs, and particularly by H.E. Louise Mushikiwabo, IOF Secretary-General. Elected to lead the IOF last year, she offered warm thanks to the Principality for its commitment and organisation, and highlighted the values “of this Francophone multiculturalism which today finds itself at a crossroads and needs only to assert its unifying strength.”

These expressions of strength and unity through the sharing of a common language were also present in a video message from H.S.H. Prince Albert II shown at the conference, in which he reiterated to the Secretary-General his full support for the reforms that she had initiated and confirmed his commitment to her vision for the French-speaking world.

In addition to the official speeches, a key theme of the opening ceremony was young people. This was strongly emphasised through the highly acclaimed performances by the Little Singers of Monaco and dancers from the Princess Grace Dance Academy, as well as the message full of wisdom, hope and respect delivered by students from the Sciences-Po campus in Menton. 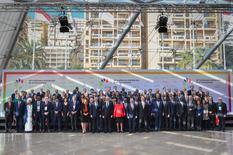