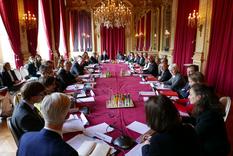 The Commission for Franco-Monegasque Cooperation (CCFM) met in Paris on 1 April 2019. Established in its current form by the Treaty intended to adapt and strengthen friendship and cooperation relations between the Principality of Monaco and the French Republic, dated 24 October 2002, the Commission meets annually, alternating between Paris and Monaco. It serves as a framework for regular consultation between the two countries on subjects of national interest in the spirit of their “common destiny”.

The eleventh meeting of the CCFM was co-chaired by Mr Maurice Gourdault-Montagne, Secretary-General of the Ministry of Europe and Foreign Affairs, and His Excellency Mr Serge Telle, Minister of State of the Principality of Monaco. It was attended by Her Excellency Ms Marine de Carné-Trécesson, France’s Ambassador to Monaco, Her Excellency Ms Sophie Thevenoux, Ambassador and Head of Monaco’s Mission to the European Union, His Excellency Mr Christophe Steiner, Monaco’s Ambassador to France, and the representative of the Prefect of the Alpes-Maritimes.  The Monegasque delegation[i] comprised members of the Prince’s Government and staff from the relevant ministries. The French delegation[ii] included representatives from ministries responsible for handling Franco-Monegasque relations.

Among the items on the agenda was the issue of the current negotiations on an association agreement between the Principality of Monaco and the European Union. France and Monaco emphasised the need for the future draft association agreement to take account of the features which make Monaco unique in order to maintain internal balances within the Principality, as well as their commitment to respecting a number of Franco-Monegasque agreements that are essential to close cooperation between the two countries. France reiterated its full support for Monaco as it continued these negotiations.

The Commission also took note of the work done by the local cross-border commission, which met on 11 January 2019, to improve transport links within the Franco-Monegasque region, and particularly the progress that had been made on the Beausoleil slip road and the forthcoming launch of working groups on housing, teleworking and water shuttles.

The Commission also discussed the forthcoming entry into force of two Franco-Monegasque agreements on healthcare safety and blood transfusions. The Principality of Monaco also suggested that its hospital departments could host medical interns following the French training curriculum as part of qualifying placements. The Commission further welcomed the forthcoming signature of a memorandum of understanding on the issuing of health professionals’ cards to Monegasque pharmacists.

On the issue of employment law, the difficulties associated with the application of the Agreement on Unemployment Insurance were the subject of particular discussion. The prospects of a bilateral agreement were mooted in order to re-establish equal rights for employees in the Principality of Monaco with regard to access to employment assistance and the partial unemployment scheme.

Transport safety is a shared concern. Among other things, the Commission addressed efforts to combat traffic offences, as well as safety in the Rainier III tunnel which links the Principality to France.  In addition, the two countries welcomed the publication of a decree opening up the possibility for Monegasque passport holders to take advantage of the Rapid Border Crossing (Parafe) scheme.

On education, the Commission welcomed the measures adopted by France to prevent Monegasque nationals from having to pay differentiated university fees at the start of the academic year in 2019. The two countries will promote interoperability between their digital applications.

France and the Principality of Monaco, sharing the same commitment to environmental issues, discussed the protection of the oceans and the next deadlines for international negotiations on climate and biodiversity, as well as the Global Pact for the Environment.

They also discussed the next Ministerial Conference of La Francophonie, which will meet in the Principality in October 2019, shining a spotlight on the language shared by France and the Principality.

The two delegations agreed to convene for the next session of the Franco-Monegasque Commission in Monaco in 2020.

H.E. Ms Sophie Thevenoux, Ambassador and Head of the Principality of Monaco’s Mission to the European Union

Ms Isabelle Costa, Deputy Secretary-General of the Government for the Europe Unit

Mr Jean-Marie Veran, Special Advisor to the Minister of Foreign Affairs and Cooperation

Ms Séverine Dusaintpere, First Secretary at the Embassy of Monaco in France

Mr Maurice Gourdault-Montagne, Secretary-General of the Ministry of Europe and Foreign Affairs (MEAE)

Mr Cyril Vinsonnaud, Deputy to the Chief of Staff for European Relations and Policies, Ministry for Solidarity and Health, Ministry of Labour

Mr François Candiotti, Head of Switzerland and Southern Europe Section, Directorate of European and International Affairs, Ministry for the Ecological and Inclusive Transition