France, led by Cardinal Richelieu, was aware of the advantages of Monaco’s position, and began paying attention to the Prince in 1630. The Thirty Years’ War, which started at the beginning of the 17th century, was to do with the rivalry between France and Spain and demonstrated the advantages of Monaco as a bridgehead to Italy. 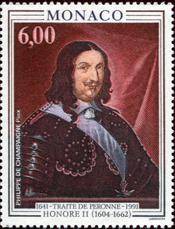 Negotiations led to Louis XIII signing the treaty of Péronne on 14 September 1641, which formally recognised the independence of the Principality. Monaco was then positioned under the protection of France, and the sovereignty of Monaco was guaranteed by the presence of a French garrison which was placed under the authority of the Prince.