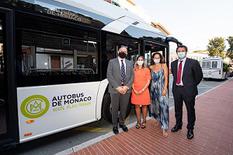 On Wednesday 16 September, Public Transport Day, when public transport is free of charge, and which is part of European Mobility Week, the Prince's Government set out the future directions of its urban mobility policy to the Press. This policy is in line with its stated aims of reducing carbon gas emissions.

During a tour of the city in an all-electric bus, which is currently being trialled in the streets of the Principality, Severine Canis-Froidefond, Director of Forward Studies, Urban Planning and Mobility, Roland de Rechniewski, Director of the Monegasque Bus Company (CAM), Georges Gambarini, representing the Interministerial Delegation for Digital Transition and Annabelle Jaeger-Seydoux, Director of the Energy Transition Mission, announced several new innovations.

In turn, they discussed the development of the CAM's fleet of buses, in particular the move towards electric buses, the contribution of new digital services in terms of ticketing, with the launch of the Mona Pass mobile App in January 2021, and the inclusion of the Monegasque bus network in the Sud Azur multimodal pass as from October.

To improve the flow of bus traffic, connected traffic lights will be introduced on some of the Principality's main roads. A first test phase will begin in October. Finally, the MonaBike network, which currently has 32 stations, will soon be extended by 11 additional stations, making a total of 400 red and white electric bicycles.

14 January 2021 Press release
Urban Mobility Policy in the Principality Electrical and Digital Innovations for an Improved Service
Contact us
http://en.gouv.mc/A-la-Une-du-Portail/Urban-Mobility-Policy-in-the-Principality-Electrical-and-Digital-Innovations-for-an-Improved-Service