Summary of Action by the Mission for Energy Transition 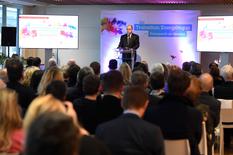 The event "At the Heart of Energy Transition - The Main Players" was held yesterday evening in the presence of H.S.H. the Sovereign Prince.

Marie-Pierre Gramaglia, Minister of Public Works, the Environment and Urban Development, gave a summary of the action undertaken by the Mission for Energy Transition*, a year after the publication of the White Paper.  She also pointed out that the Sovereign Prince, who was the first to sign the Charter of Commitment to the National Pact on Energy Transition, "gave a tremendous boost to the pact, which now has more than 350 members."

Seven players from civil society then spoke on their action to promote energy transition, on a day-to-day basis, each in their own field.

To close the evening, H.S.H. the Sovereign Prince, who had called for the implementation of a National Pact on Energy Transition, stressed our collective responsibility in the face of the need to reduce greenhouses gases, so as "not to mortgage our children's future."  The Sovereign concluded his speech by recalling the words of Ban Ki-moon, "There is no plan B, because there is no planet B."

A report will be available on our social networks and on Monaco Info from 7 p.m. this evening.

* Launch of the White Paper, a dedicated web site, the solar survey, and the National Pact.

06 July 2020 Press release
Summary of Action by the Mission for Energy Transition
Contact us
http://en.gouv.mc/A-la-Une-du-Portail/Summary-of-Action-by-the-Mission-for-Energy-Transition