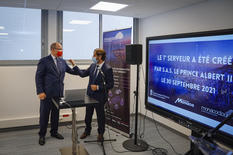 Press release by the Prince’s Government

31 January 2023 Press release
Sovereign cloud launches in the Principality of Monaco, a first in Europe that will improve Monaco’s competitiveness
Contact us
http://en.gouv.mc/A-la-Une-du-Portail/Sovereign-cloud-launches-in-the-Principality-of-Monaco-a-first-in-Europe-that-will-improve-Monaco-s-competitiveness