SBM Offshore - 5th Life Day, in Partnership with the Mission for Energy Transition 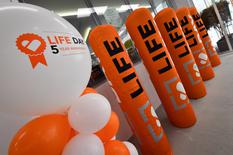 On Tuesday 15 May, the staff of SBM Offshore were invited to take part in the company's 5th Life Day.  The idea was to organise a day centred on themes relating to safety, health, the environment, the well-being of employees, and sustainable development. From 10.00 a.m. to 4.30 p.m., staff members were able to take part in awareness-raising and/or training workshops on these various themes.

This event is held each year in all the countries in which the Company operates (Malaysia, Brazil, the United States, Angola, etc.).  The Group has 850 employees in the Principality and more than 4,700 worldwide.

This 5th edition was notable for its "energy transition" aspect.  The Mission for Energy Transition, supported by a team of six volunteers from SBM Offshore, had a dedicated "pop-up" stand at the entrance to the building.  The aim was to encourage employees to join the National Pact on Energy Transition.  The event attracted sixty or so new members.

A report will be available shortly on our social networks and on Monaco Info.