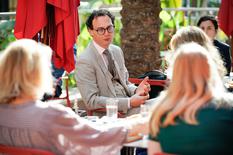 At the time of the review of tourism results for the summer season, which was presented to the Press today, the Director of Monaco Tourist and Convention Authority, Guy Antognelli, gave a mixed analysis, stating that, " Although the figures are clearly down, in the health situation we are experiencing, the results are better than predicted."

The summer clientele was predominantly European. Increases were seen in local markets such as France, Belgium, the Netherlands and Switzerland "before some of these countries introduced a quarantine rule for travellers returning from the Principality, in the same way that it was applied to other affected areas in Europe."  Italian clients remained loyal to the Principality, in smaller numbers, but were nevertheless present among the top three countries, behind France and Switzerland.

The strategy adopted by all the hoteliers was not to cut the prices of "Destination Monaco," despite the absence of a large number of clients with high purchasing power, who usually book suites, as the Americans, Russians and Asians were unable to travel.

As the only major attraction that remained open, the Oceanographic Museum had to adapt its maximum capacity to 700 visitors at the same time. It nevertheless managed to do well, with a peak of 50,000 visitors in the first fortnight of August (compared with 60,000 during the same period in 2019).

As concerns business tourism, Guy Antognelli clearly explained that "the Government in no way cancelled professional events. It put health protocols in place in compliance with the measures implemented in the Principality of Monaco to limit the spread of the virus. Despite their efforts, the organisers of these events decided to cancel, either for reasons of economic profitability or because there were no exhibitors. The Tourist and Convention Authority supports those who maintain and continue to have confidence in the Principality on a daily basis, both logistically and financially, in particular by covering some of the additional costs related to the implementation of health measures. It is also assisting our partners, hotels and the Grimaldi Forum, in this particularly difficult time."

Finally, with regard to the information concerning the limit of 1,000 participants for gatherings, he explained that this refers to the number of people present at the same time in the same place. Since it was introduced, this limit (which was previously 5,000) has applied to public events, with congresses and cultural events being subject to a specific protocol for individual approval, regardless of the size involved.

21 January 2021 Press release
Overview of Tourism in the Principality : The Results for the Summer Season are "Less Gloomy than Expected"
Contact us
http://en.gouv.mc/A-la-Une-du-Portail/Overview-of-Tourism-in-the-Principality-The-Results-for-the-Summer-Season-are-Less-Gloomy-than-Expected