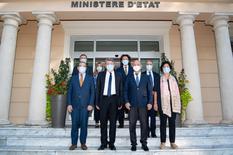 From 15 to 18 September, Monaco was host to experts from the Council of Europe's Committee for the Prevention of Torture and Inhuman or Degrading Treatment or Punishment.

This periodic visit of experts follows Monaco's ratification in 2005 of the Convention of the same name.  Today, this international treaty brings together the 47 Member States of the Council of Europe, which regularly receive experts from the European Committee on their territory.

This European Committee is not an investigative committee, but a non-judicial, preventive mechanism.  It makes recommendations to countries to help them, in particular, improve the material conditions of people who have been deprived of their liberty.  The experts are independent and impartial.  They may be lawyers, doctors, or specialists in prison or police matters.  Their role is to visit places of detention, such as prisons, police stations, psychiatric hospitals, detention centres for foreigners, etc.

If a country does not cooperate or refuses to make improvements to a situation in the light of the recommendations made to it, the Committee may decide to make a public declaration.  In addition, it publishes a general report of its activities every year, which is posted on the Council of Europe's website.

30 November 2021 News flash
Monaco and the Prevention of Torture Council of Europe Experts Visit the Principality of Monaco
Contact us
http://en.gouv.mc/A-la-Une-du-Portail/Monaco-and-the-Prevention-of-Torture-Council-of-Europe-Experts-Visit-the-Principality-of-Monaco