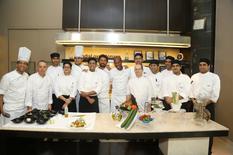 The Principality’s Tourist and Convention Authority (DTC) and the Société des Bains de Mer (SBM), in partnership with the Vetro Restaurant at the Oberoi Hotel, organised the Monaco Organic Food Festival in Mumbai from 26 to 29 September. The festival was led by Michelin-starred chef Marcel Ravin.

This showcase for Monegasque cuisine, with its slogan “From Monaco with love”, very quickly won over its target audience in the “Indian city of dreams” previously known as Bombay, thanks to the talent and personality of the Monte-Carlo Bay Hotel and Resort’s head chef.

Over the course of four days, the Monaco Organic Food Festival offered exclusive fine dining events for influential celebrities, food industry personalities and other top businesses, as well as representatives from the media.

Speaking at a press lunch organised by Monaco’s Representative Office in India, Corinne Kiabski, Press and Communication Manager – International Market for the Principality’s Government Communication Department, welcomed this initiative: “The festival has been very productive for Monaco, as we have met some very interesting media personalities and influencers, and we share the same sustainability values.” These impressions were backed up by Chef Marcel Ravin himself: “I have been waiting so long to come to India. This was a dream come true for me. It was an experience to be able to share our knowledge with our Indian colleagues, proving that cooking is first and foremost about love and sharing. It has inspired me to such an extent that I’m going to incorporate the flavours of Indian spices into the creation of new dishes – that’s a promise.”

“The entire event was designed to bring the culinary art of the Principality to India, and we hope, in return, to attract some high-end Indian travellers to the Mediterranean coast,” concluded Rajeev Nangia, Director of the Monaco Office in India.

It was for this reason that the festival was held to coincide with a joint marketing tour to New Delhi, Mumbai and Bangalore conducted by the DTC, SBM and the Fairmont Hotel.