The Women's Rights Committee has launched a new phase in its communications campaign for equality.  The theme of this year's campaign is therefore equality in sports and leisure activities.

Illustrated by three sporting disciplines, some of which are practised mainly by boys or by girls (gymnastics, rugby and drumming), the campaign aims to raise awareness of the fact that there are still inequalities in the practice of certain activities, but that it is possible to change people's outlook.

The Committee's campaign is based in particular on IMSEE's "Monaco in Figures" 2021 statistics, which show that 66% of gymnastics licence holders are girls.  Furthermore, 89% of rugby licence holders are boys, according to AS Monaco Rugby.  As concerns leisure activities, 15% of girls are enrolled in drumming classes, according to figures from the Rainier III Academy of Music.

The campaign is in the form of visuals and an animated video, which includes this information and the inclusive slogan "Everyone has their place ... ". 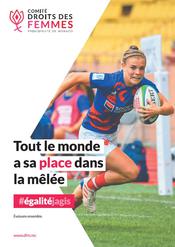 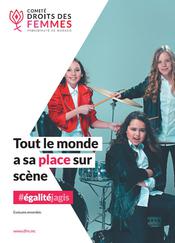 19 October 2021 Press release
It's a New Autumn Term for Equality in Sports and Leisure Activities
Contact us
http://en.gouv.mc/A-la-Une-du-Portail/It-s-a-New-Autumn-Term-for-Equality-in-Sports-and-Leisure-Activities