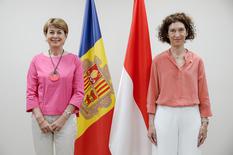 On Friday 17 June 2022, Isabelle BERRO-AMADEÏ, Minister of Foreign Affairs and Cooperation, visited the Principality of Andorra for a meeting with the Prime Minister Xavier ESPOT ZAMORA, Minister of Foreign Affairs Maria UBACH FONT and Secretary of State for European Affairs Landry RIBA. She was also received by the General Syndic of the General Council (Speaker of the Parliament), Roser SUÑÉ.

The trip was an opportunity for an update on the negotiations regarding the association agreement with the European Union and to plan a further meeting of the three chief negotiators (Andorra, San Marino and Monaco) in the coming months.

The Andorran authorities also proposed formalising the friendly, cooperative relationship between the two principalities with a memorandum of understanding, the terms of which will be set out over the next few months.

The two delegations discussed the possibility of signing a double tax agreement (DTA).

Prime Minister Xavier ESPOT ZAMORA and Parliamentary Speaker Roser SUÑÉ welcomed the sustained and cordial dialogue between the two countries, marked recently by a visit to Monaco by the Minister of Tourism and Telecommunications, and Ms SUÑÉ’s attendance at the Conference of Presidents of Parliaments of the Small States of Europe.

“This visit helps to strenghen our already very close bonds of friendship and consider new areas for development where we have shared interests,” emphasised Ms Berro-Amadeï. 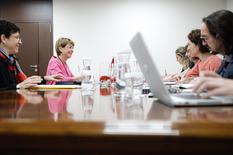