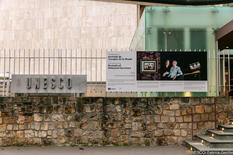 H.E. Mr Frédéric Labarrère, Monaco’s Ambassador to Poland, took part in the ceremony marking the 77th anniversary of the liberation of the Auschwitz-Birkenau camp. The theme for the ceremony, held under the high patronage of the President of the Republic of Poland, H.E. Mr Andrzej Duda, was: “1942 and the transformation of Auschwitz-Birkenau into an extermination camp”. The ceremony included poignant testimony from the last survivors of the camp and prayers read by representatives from various faiths.

The Principality of Monaco also joined with UNESCO to commemorate this international day. The UN organisation coordinated a series of events, including a commemorative ceremony and a debate on the heritage of Jewish artists who died during the Holocaust, such as Chaïm Soutine and Otto Freundlich, as well as an exhibition at its headquarters on Place Fontenoy in Paris.

The latter, entitled: “Generations: Portraits of Holocaust survivors”, has received support from the Principality of Monaco, which has long been a contributor to the organisation of International Holocaust Remembrance Day. Running until 4 February 2022, the exhibition features more than 50 contemporary photographs of survivors and their families, which shine a light on the full lives they have been able to live since then, as well as the responsibility we all bear to share their stories with the public.

All were alarmed at the fresh upsurge in anti-Semitic actions and remarks, as well as misinformation about the Holocaust, 77 years after the liberation of the Auschwitz-Birkenau concentration and extermination camp.

To combat Holocaust denial and distortion, Facebook and TikTok users searching for terms associated with the Holocaust will now see, at the top of their results, a banner inviting them to visit the “Facts about the Holocaust” website jointly set up by the World Jewish Congress and UNESCO, at: https://aboutholocaust.org/en.

Finally, in addition to actions being taken in schools, Monaco has joined the social media campaign organised by the European Jewish Association, by publishing a photograph of a lit candle in memory of victims of the Holocaust.