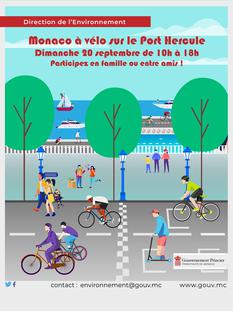 As part of European Mobility Week, the Port district will be partially closed to traffic on Sunday 20 September from 10 a.m. to 6 p.m., so all ages can get together on foot, on a bike or a skateboard, scooter, etc.

The aim of this convivial event, to be enjoyed with family or friends, is to encourage people to reclaim territory that is usually occupied by cars.

There will also be activities on the Quai Albert 1er (opposite the Rue Princesse Caroline): test drives of electric bicycles and scooters and a demonstration of the Monabike service by the Monegasque Bus Company.

For everyone's safety, you are reminded that helmets must be worn up to the age of 18 when riding bicycles and scooters.

This event, organised by the Department of the Environment, will take place in strict conformity with health rules and barrier measures. It will be obligatory for those who are not taking part in sporting activities to wear a mask, and hydroalcoholic gel will be made available to them.

The circuit will involve the closure, from 10 a.m. to 6 p.m., of certain traffic routes (the Boulevard Albert 1er, part of the Avenue JF Kennedy and the Route de la Piscine).
It should be noted that the following routes will, however, be accessible to automobile traffic:
- Tunnel Rocher, Fontvieille direction Nice, Monte-Carlo, Rue Grimaldi.
- Tunnel Rocher, Avenue du Port (Place d'Armes) direction Fontvieille, Nice, Monte-Carlo, Rue Grimaldi.
- The central T of the Port by the Avenue de la Quarantaine, the Quai Antoine 1er, and the edge of the Route de la Piscine on the coastal side, and
- the Quai Antoine 1er and Digue car parks by the Avenue de la Quarantaine.

20 January 2021 Press release
"Cycling Sunday" in the Principality of Monaco, A Convivial Event to Enjoy with Family or Friends
Contact us
http://en.gouv.mc/A-la-Une-du-Portail/Cycling-Sunday-in-the-Principality-of-Monaco-A-Convivial-Event-to-Enjoy-with-Family-or-Friends