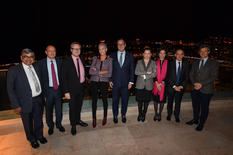 On 28 and 29 November 2018, the Monaco Digital Advisory Council (MDAC) met for the first time in Monaco, chaired by H.S.H. Prince Albert II of Monaco.  This Committee is comprised of global experts from the public and private sectors in the field of digital technology.  Its main mission is to advise Monaco on its strategic vision with regard to digital technology and on implementing its actions.

The creation of a committee of digital experts in Monaco sends a strong signal from the Principality of its ambition for digital transition in the service of its population and its influence at the international level.

Digital transition is the greatest challenge for countries, businesses and individuals.  The positioning of each entity and the ability to benefit from this revolution will determine the winners in the current economy and the economy of the future.

The creation of the MDAC, which is comprised of the global elite from public and private institutions that have links to the technology sector, is an asset for achieving these objectives.

The MDAC is led by Mr. Frédéric Genta, Country Chief Digital Officer.  It missions are many-fold:

This initiative is fully in line with the digital shift taken by Monaco since March 2018 with the creation of the Digital Transition Office, a Government entity comprised of 110 people and headed by Frédéric Genta, which deals with all these issues (including platforms, telecoms, education, mobility, the digital economy, innovation, etc.).

Ten well-known figures are taking part in the first MDAC

Ten experts from the public and private sectors worldwide accepted an invitation to attend the first MDAC, which is taking place until this evening in Monaco:

Drawing upon their expertise and diverse backgrounds, these experts will formulate recommendations to help define the Principality's digital vision and strategy and how it will be drawn up and implemented by the Prince's Government under the authority of H.S.H. the Sovereign Prince.

The MDAC focuses on a set of clearly defined areas of work, in fields where its members' specific skills and influence can have the greatest impact.

It makes it possible to build bridges and create partnerships between Monaco and the partners represented at the Council and leaders in the digital sector.

It plays an important role in forming linkages between the public authorities and industry, to ensure that the Principality is the best place to start and develop a digital business and to put innovative solutions to the test.