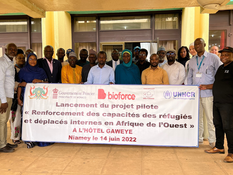 Convinced that education can change lives and that vocational training opens the doors to employment, the three partners launched an innovative pilot project in Niamey (Niger) on Tuesday 14 June. The aim of the project is to train refugees and internally displaced people for work in the humanitarian and development sector in West Africa.

There are 1.6 million refugees in West and Central Africa, and more than 7.6 million who have been internally displaced within their own country, and their opportunities for vocational training and access to the employment market are extremely limited. Currently, only 1.2% of refugees have access to higher education in this region, compared with 37% of young people globally.

In this context, Bioforce, the UN Refugee Agency and the Prince's Government are convinced that it is vital, through training, to enable internally displaced people and refugees to play a much more central role in preparing and implementing the programmes designed to help them, so that they can make their voices heard. This is the goal of the pilot project being rolled out by Bioforce, the UN Refugee Agency and their national partner, the Nigerien medical NGO Forsani, with support from the Prince’s Government of Monaco.

As part of this project, two approaches are being offered to refugees and displaced people. The first seeks to facilitate access to short training courses delivered by Bioforce in Niger on key humanitarian skills. The first of these courses, on humanitarian logistics management, was held in Niamey. The second approach will enable young refugees and displaced people from throughout the region to enrol at the Bioforce Training Centre Africa in Dakar, Senegal from September, and take one of the diploma courses available there. Finally, all of the young people who undertake this training will receive support to help them enter the employment market.

“We would like to express our appreciation and gratitude to the Government of Niger, the UN Refugee Agency, the Principality of Monaco and Bioforce for this timely initiative, which will help us to build our capacity and become more competitive on the employment market,” said Ousmane Wordougou, President of the Association of Refugee Pupils and Students in Niger, at the launch ceremony. He reiterated that in addition to access to education, entry into the workforce was also a key concern.

For her part, Sandra Perrot, Director of Operations at Bioforce, stressed that: “Developing crisis preparation and response by building the capacity of those involved is central to Bioforce’s aims and activities. Today, we are proud and happy to be launching the implementation of a project that will contribute to action to ensure human rights and the human dignity of refugees and internally displaced people.”

In the presence of the Technical Advisor to the Nigerien Minister of Humanitarian Affairs and Disaster Management, Abdoulaye Douka, representing Monaco’s Department of International Cooperation, welcomed Niger’s remarkable policy on welcoming refugees. He noted that this project “is a realisation of the Principality of Monaco’s commitment to the Global Compact on Refugees.”

Abou Moussa, Technical Advisor to the Nigerien Minister of Humanitarian Affairs and Disaster Management, invited the representatives of 15 local and international humanitarian organisations attending the launch to work to bring these refugees and internally displaced people effectively into their teams after their training. His plea was echoed by the UN Refugee Agency’s Deputy Representative in Niger, Kahilo José Katounda: “I would like to take advantage of this launch to invite you to join us in this advocacy [...] You also have a direct role to play, not least in considering recruiting these young refugees and internally displaced people to work in your organisations.”

Spotlight on bats in the Principality

Roll-out of 3D terminals aimed at tourists in Principality