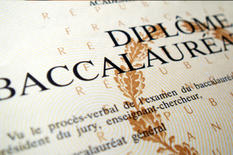 It seems that the 2019-2020 school year has been outstanding in more ways than one.  It came to a close with 99.8% of the Principality's 426 secondary school pupils passing the National Brevet Diploma (≈GCSE), of whom 376 passed with honours, of which 182 were the highest honours.

Thus, 100% of the 302 pupils of the College Charles III passed this examination, with a record 90% of honours, including:

Among these brilliantly successful students were two young pupils of Syrian origin, who are siblings, and respectively passed their exams with the highest honours and high honours.  This is remarkable for these pupils, who had no knowledge of the French language when they arrived in the Principality three years ago.

The 116 pupils of the François d'Assise - Nicolas Barré private institution also achieved faultless results with 100% success, with a rate of 87.5% passes with honours, including:

For their part, the pupils of the General and Professional Education (Special Needs) Section achieved a magnificent feat;  7 of the 8 candidates for this exam passed with honours, 4 of which were the highest honours.

Finally, it should be noted that, with regard to the tests for the 2nd group of the 2020 Baccalaureate exams (≈ A-levels), there was a success rate of 100%, for all options, for pupils who attend educational establishments in the Principality of Monaco.

These remarkable results attest to the quality of the teaching provided to pupils in the Principality, thanks to the commitment and great professionalism of their teachers.

The Prince's Government wishes to congratulate secondary school and high school pupils for their conscientiousness and outstanding performance in the end-of-school examinations.

It also reiterates its sincere thanks to the Department of Education, Youth and Sport for its high-quality leadership of the Principality's educational and school management teams, and extends its warm congratulations to the teaching and non-teaching staff for their commitment and the quality of their support for pupils.