Reception in Honour of Baccalaureate Students who Obtained the Highest Honours 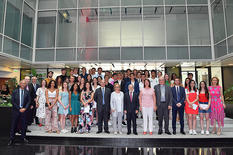 Patrice Cellario, Minister of Interior, accompanied by Monsignor Barsi, Archbishop of Monaco, Brigitte Boccone-Pagès, Vice-President of the National Council, Isabelle Bonnal, Director of Education, Youth and Sport, as well as other high-ranking dignitaries and Heads of the Principality's high schools, recently received the 75 students who obtained the highest honours in the 2019 Baccalaureate examinations.  The ceremony took place on the patio of Monaco's Vocational and Catering School (Lycée Technique et Hôtelier de Monaco).

On behalf of the Government, the Minister congratulated the winners on their brilliant success and commended the work of the educational community in the Principality in preparing and supporting the students.  He stated in particular, "I am delighted to celebrate your success and that of the Monegasque education system, for which I hope you will be ambassadors in the brilliant studies you are about to undertake."  Finally, Mr. Patrice Cellario paid tribute to the outstanding standard achieved by successful Baccalaureate students this year;  more than one in two were awarded high honours or the highest honours.