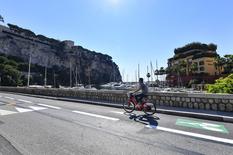 As part of the 19th European Mobility Week, the aim of which is to raise awareness among European citizens of new ways to travel, various initiatives and actions are being offered or implemented by the Prince's Government:

The Monaco-Monte-Carlo Railway Station is celebrating its 20th anniversary by developing services and equipment in line with the Principality's eco-sustainability and digital challenges.

• Friday 18 September:  Official launch of the Klaxit app in the Principality

A new car sharing scheme, which is particularly suited to commuting.  This one-year experiment is being conducted jointly by the Mission for Energy Transition, the Department of Forward Studies, Urban Planning and Mobility and the Digital Transition Office.

The Port District will be partially closed to traffic (the Boulevard Albert 1er, part of the Avenue JF Kennedy and the Route de la Piscine).  All ages will be able to meet there on foot, on a bike, skateboard or scooter ... from 10 a.m. to 6 p.m.