Principality plays the solar card... all year round 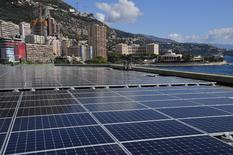 Principality plays the solar card... all year round

When it comes to the renewable energy options that the Principality hopes to exploit as part of the energy transition called for by H.S.H. Prince Albert II, solar power and seawater heat pumps will be the primary sources that will supply the action plan rolled out by the Prince’s Government.

Over the last two years, photovoltaic panels have been taking over the Principality’s roofs, and are now found on both private homes and public buildings, including the Parc and Révoires primary schools, as well as Monaco’s Vocational and Catering School. The next project in line is the installation of nearly 500 m² of panels on the roof of Fontvieille Fire Station. These will produce 88,000 KWh annually, help to reduce CO2 emissions by 7.2 tonnes per year, and supply nearly 27% of the electricity used by the entire fire station and the building’s 40 housing units.

Last April saw the inauguration of 1,000 m2 of photovoltaic panels on the roof of the Monte-Carlo Bay hotel. This is a solar power plant funded, operated and implemented by SMEG as part of the SunE contract. It receives a Government grant and guarantees photovoltaic electricity generation for 15 years.

Finally, in mid-September this year, H.S.H. the Sovereign Prince officially opened a power plant comprising 2,425 m2 of photovoltaic panels on the roof of the Grimaldi Forum. These were also installed by SMEG in anticipation of the requirements of the offshore urban extension project and will be part of the new district’s energy mix. The installation received €1.5 million in funding paid to the State by SAM Anse du Portier.

To encourage more take-up of solar power among individuals, in June 2017 the Government published an online solar resource map, which provides all residents with information on the solar PV production capacity of every roof in Monaco (www.cadastresolaire.mc). Since 2008, the State has offered residents grants for the installation of solar PV and thermal panels.

Finally, through the company Monaco Energies Renouvelables, founded in partnership with SMEG, the Principality has purchased eight solar power plants in France, covering 10% of the Principality’s electricity consumption.