As part of the Offshore Urban Extension Project in Monaco, the Prince's Government has launched an unprecedented operation to transplant a large amount of the posidonia affected by the reclaimed area.

The BouyguesTravaux Publics company is carrying out the maritime infrastructure works, the foundation for the offshore extension, in association with the Trasomar and Andromède Océanologie companies.  It has just finished transplanting 500 m² of posidonia on two sites - within the Larvotto reserve and at the foot of the Fontvieille sea wall. 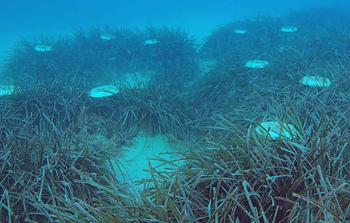 Posidonia (Posidonia oceanica) is a marine flowering plant that is endemic in and emblematic of the Mediterranean.  Today, it is a protected species.  Posidonia grows in the form of meadows.   It constitutes a major marine ecosystem, providing shelter for considerable biodiversity.   It is also a source of oxygen and absorbs carbon dioxide.

There is currently no proven method for transplanting posidonia. Therefore, within the framework of the offshore urban extension project, a scientific research operation was undertaken to optimise the transplantation of the plant.  The method chosen was adapted from a stump-grinding machine.  A cutting tool was used to pick up tufts of posidonia in half-spheres.  These were placed in metal baskets covered with biodegradable natural-fibre cloth, moved and replanted.

Pierre Descamp, manager of Andromède Océanologie, has been involved in the urban offshore extension project for more than two years.  He stated, "For relocation to the reserve, a hole the width of a basket was dug in the sediment to hold the posidonia that had been lifted.  Once in place, the gaps were filled with sediment.  To preserve the meadow structure, the baskets were placed as close together as possible."

In Fontvieille, the replanting was undertaken in a different way.  Planters were installed at a depth of 14m to accommodate the baskets.  These were then weighted down with sediment so the plant could live and grow there.

Scientific monitoring of the transplants will be undertaken for ten years.  This monitoring will make it possible to study the dynamics of the meadow and check to see if the graft has taken successfully.

Marie-Pierre Gramaglia, Minister of Public Works, the Environment and Urban Planning, stated, "Following the displacement of 147 fan mussels from the area of the future extension to the Larvotto reserve, the transplantation of 500 m² of posidonia is the second major operation in the preparatory environmental works for the project.  Monitoring over 10 years will ensure the success of the transplanted posidonia. "

A link to a video of the posidonia transplantation process can be found below: