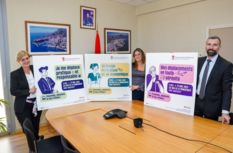 Encouraging the use of public transport to ease traffic, reduce greenhouse gas emissions and improve quality of life for Monegasque nationals, residents, commuters and visitors to the Principality is the aim of a large-scale trial being operated by the Prince’s Government with support from the Monegasque Bus Company (CAM).

From Monday 3 October until Sunday 27 November 2022, buses in the Principality of Monaco will be free for everyone.

At a press conference held to present the trial at the Ministry of State on Monday 26 September, Céline Caron-Dagioni, Minister of Public Works, the Environment and Urban Development, set out for the Principality’s media the pillars of the Prince’s Government’s mobility policy and unveiled the communications campaign that will be rolled out during this trial phase. Séverine Canis-Froidefond, Director of Forward Studies, Urban Planning and Mobility, and Stéphane Bortolini, Operations Engineer at CAM, also took part in the press briefing. The decision to run the trial was taken by the Prince’s Government in conjunction with the National Council.

With 41 property development projects currently underway in the country and more than 200 major events each year, mobility is a constant challenge in the effort to strike a balance between quality of life and economic vitality. The Prince’s Government is seeking to get all users in the Principality involved through a communications campaign titled Ensemble, adoptons le bon réflexe! (Let’s Do the Right Thing Together!). The campaign has three visuals, targeting different age groups.*

To reposition buses as the preferred mode of transport in the Principality and create a virtuous circle that will help to reduce traffic within Monaco by 20%, the Prince’s Government will carry out a field survey during the trial period. Officials will go out to talk to users at strategic bus stops and use an online platform, which will be available soon, to collect their views and further improve this public service.