Launch of the Cliiink Reward Programme for Sorting Glass Packaging 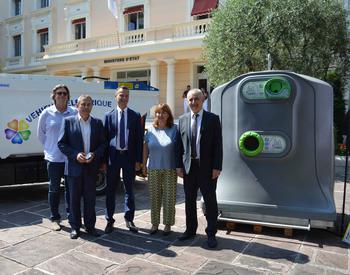 At a press conference held today, Marie-Pierre Gramaglia, Minister of Public Works, the Environment and Urban Development, presented the launch of the Cliiink smart-city scheme to the media.  This is the first reward programme for sorting glass packaging.

The press conference was attended by Thomas Battaglione, Managing Director of the Société Monégasque de l'Electricité et du Gaz (Monaco Electricity and Gas Company)(SMEG), the Directors of Urban Development and the Société Monégasque d'Assainissement (Monegasque Sanitation Company)(SMA), Nicolas Matile Narmino, President of the Monaco Union of Traders and Artisans (UCAM) and the staff of Terradona, the company behind the Cliiink scheme.

Marie-Pierre Gramaglia opened her speech with a presentation on the renewal of the SMA Concession.  Recalling that waste accounts for a third of GHG emissions, she pointed out that the new specifications are based on ambitious criteria, in line with the energy transition policy.  Three objectives are thus being targeted: "Supporting efforts to reduce GHG emissions, stabilising the quantity of waste produced by 2030 and optimising the recovery of waste produced by recycling and energy recovery."

Marie-Pierre Gramaglia then introduced Cliiink, the first reward programme for sorting glass packaging in Monaco, set up in partnership with traders.  She emphasised that "We must strengthen involvement in glass collection.  That is why the Prince's Government has decided to implement the Cliiink deposit system."

Thus, the 28 public green stations for glass collection are now equipped with a smart counting system, which is attached to the lid of the container.

By putting their waste in the container, users accumulate points, enabling them to benefit from offers from more than 50 traders (to date) in the Principality.  The points can also be transformed into donations to charitable associations.  Users can therefore do two good deeds - preserve the planet and help those in need.

As a reminder, glass, which adds to GHG emissions when it is first manufactured, plays a major role in waste.  It takes several thousand years for it to disintegrate completely in Nature.  However, it is 100% and infinitely recyclable, without any loss of material.

For more information, see the attachments.

This topic can be found on our social networks and from this evening on Monaco Info.