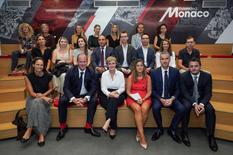 As part of the 21st European Mobility Week*, on 20 September the Digital Transition Office (DITN) hosted institutional representatives and partners to mark the second anniversary of the launch of Klaxit in the Principality, a car-sharing solution particularly suited to commuting.

The event opened with a speech by Céline Caron-Dagioni, Minister of Public Works, the Environment and Urban Development, who reaffirmed the four key planks of the mobility policy adopted by the Prince’s Government.
Julien Dejanovic, Director of Digital Services at the DITN, then emphasised the unique opportunity to create smart mobility in the Principality using digital technology.
The presentation ended with a review of the past two years by Sévérine Canis-Froidefond, Director of the Department of Forward Studies, Urban Planning and Mobility, while three partner organisations, whose employees have been using the app, described their experiences and impressions.

This car sharing solution was officially launched in September 2020, and has since then been co-funded by the Government to help cover the cost of journeys to or from the Principality. A joint initiative of the Mission for Energy Transition, the Department of Forward Studies, Urban Planning and Mobility, and the Digital Services Department, as part of the Extended Monaco programme, the solution demonstrates the Prince’s Government’s proactive policy in favour of public transport and shared mobility.
It is a public/private collaborative approach designed to help meet the State’s target of reducing road traffic by 20% from its 2019 level by 2030, while absorbing the additional traffic generated by Monaco’s economic growth. The aim is to restore traffic to a density equivalent to that of the 1990s.

The review presented at the 20 September event showed that the app is gaining in popularity with both partner businesses (who currently number 35, and together employ around 15,000 people) and the general public (who account for 54% of journeys). During the first year, the app recorded 937 journeys per month on average. That figure subsequently doubled during the first half of the second year, eventually reaching 2,000 journeys per week by the second half of the year. In addition, thanks to an intensified advertising campaign in recent months, more and more cross-border workers based in Italy have been using the app to travel to the Principality. They now account for 24% of journeys made.
Céline Caron: “The Klaxit car sharing project is one of the mobility solutions backed by the Prince’s Government. It is enjoying exponential success thanks to its many advantages: fewer vehicles on the roads, less pollution and greenhouse gases, but most importantly a bespoke solution for employees working in the Principality, for whom it provides flexibility, money saving, and also social connections.”

Julien Dejanovic: “Mobility is a strategic priority for the Prince’s Government, and therefore for the Extended Monaco programme, which encompasses the practical actions and applications introduced by the Interministerial Delegation for Digital Transition. (…) Digital technology is connecting the city and optimising urban infrastructure. The digital transition is opening up a wider vision of our territory and having an impact in terms of the job market.”
For more information about the app: https://www.go.klaxit.com/monaco

* Organised every year from 16 to 22 September, the European Mobility Week aims to raise awareness about new forms of travel.