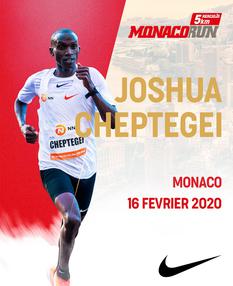 The Monaco Run concluded in 2019 with two world records in the 5km Herculis, set by Sifan Hassan and Julien Wanders.

In 2020, world 10,000m champion Joshua Cheptegei has confirmed that he will be coming to Monaco to take part in the 5km Herculis. The Ugandan athlete is hoping to stamp his mark on the history of this 5km race. French runners Jimmy Gressier, the second fastest European of all time over 10km (27’43), and Liv Westphal, the French women’s record holder over 10km, will also be lining up for the 5km event with big ambitions.

The presence of these running stars adds to an already rich programme for the weekend of Saturday 15 and Sunday 16 February on Port Hercule (in Monaco).

As it did in 2019, the Monegasque Athletics Federation will be offering races appropriate to all levels and ages, as well as a charity walk.

In advance of the 5km Herculis, Port Hercule will host the City Trail, covering around 10km. The Trail offers a chance to explore the streets of the Principality from a new perspective, an experience which won over many trail running fans last year.

For interested runners looking to test themselves in an urban setting and discover sights such as the Casino gardens, the Rocher and the Louis II Stadium, the race will start at 8.30 am on Sunday 16 February.

On Saturday 15 February, runners can pick up their bib numbers from the Running Expo between 10 am and 5 pm. Saturday afternoon will feature 1,000m races, as this flagship distance of track athletics, a feature of the Herculis EBS meeting, comes to the port in Monaco. These free races are open to all runners from age 8 up.

Finally, the Pink Ribbon Walk, a charity event covering around 5km and designed to raise awareness of the fight against breast cancer, will cross the Principality with participants all sporting pink! The walk will start from the Running Expo at 10 am on Sunday 16 February.