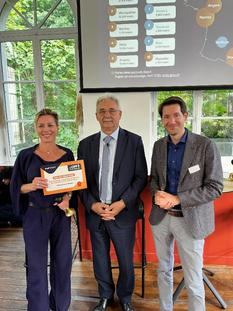 On 7 June, the car sharing app Klaxit organised the 1st OFF du Covoiturage, an event dedicated to dialogue between different regions and aimed at rewarding those that are most committed to expanding the use of car sharing for short journeys.

Among the six Gold Klaxits presented by Louis Nègre, President of the Groupement des Autorités Responsables de Transport (GART, French Association of Transport Authorities), and Julien Honnart, CEO of Klaxit, the Principality of Monaco was awarded the prize for the region which carried out the best public communications campaign.

The Klaxit app was launched as part of the Extended Monaco programme in September 2020, under the joint leadership of the Digital Services Department, the Mission for Energy Transition and the Department of Forward Studies, Urban Planning and Mobility to give a fresh boost to car sharing options in the Principality.

Thanks to the involvement of major businesses in the Principality (representing 13,000 employees), who have all signed the National Energy Transition Pact, the number of users very quickly ensured the success of this car sharing revival, which is aimed at all people starting or finishing a journey in Monaco.

The app allows users to take advantage of numerous services (guaranteed return journey with reimbursement of up to €50 available in the event of a need to take a taxi, optimisation of car sharing journeys, an “immediate departure” option, financial support from the Government, making it free for passengers, and more). Full details are available on the website: http://www.klaxit.com/

- 3,350 registered users, including 1,600 active users who have already car shared;
- Around 400 journeys financed per day during the week, or 8,000 per month. Since March 2022, a sharp rise has been observed, primarily in response to increased fuel prices and the inclusion of employees resident in Italy. As such, between 2021 and 2022, the number of journeys financed is set to rise fivefold!
- Since the app was launched, 45,000 journeys have been financed, with a total of 1 million kilometres travelled and 112 tonnes of CO2 saved!