Principality to launch mass testing campaign from next week 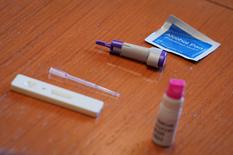 Starting next week (excluding Sunday), the Prince’s Government will kick off its COVID-19 serological testing campaign for the country’s entire population, followed by employees who work in Monaco. The campaign will cover a total of 90,000 people.

In a bid to manage the flow of people to be tested, a decision has been taken to organise the process in alphabetical order by family for all residents aged 5 years and over.*

The campaign is based on two principles:

An official letter signed by the Minister of State will be sent to each household explaining the campaign and its implementation (see attachment).

Two test centres will be set up at the Espace Léo Ferré in Fontvieille and in the Grimaldi Forum’s Espace Ravel. These will be open from 8 a.m. to 6 p.m. every day except Sundays, with the capacity to test up to 4,000 residents per day.

The schedule by alphabetical order will be published in the press, on social media and via a poster campaign. Catch-up sessions will be arranged for those who are not available during their designated time slot.

The serological tests, known as rapid diagnostic tests, will be carried out in the presence of doctors, nurses and volunteers responsible for taking the samples. The test involves a finger prick and collection of a drop of blood which is then analysed. It takes 10 minutes for the results to be obtained.

A negative result means that the person has not come into contact with the virus. Those who receive a positive result will be invited for a full blood test, which will be conducted in a laboratory and paid for by the State. This will provide more detailed information on their viral load and when they came into contact with the virus. If this is determined to be within the last seven days, the period of active contamination, a nasopharyngeal PCR test will be able to identify whether the person is infected by the virus, in which case they will be placed under mandatory quarantine.

Following the initial working days which will be devoted to testing the population, testing sessions will then be arranged at companies which agree to host them and at dedicated sites.

* Children under 5 years of age will be offered special testing under the supervision of a paediatrician at a later date.