As part of the International Day for the Elimination of Violence against Women, as organised by the Women's Rights Committee, Celine Cottalorda, Women's Rights Officer, presented the communications campaign and the programme for the day.  She was accompanied by Isabelle Bonnal, Director of Education, Youth and Sport, Karine Chatenet, President of the Soroptimist Club of Monaco, Alessandra Tognoloni, a soloist with the Ballets de Monte-Carlo and Yakuba Ouattara, a shooting guard from the Roca Team.

A campaign has been created on the theme of "Addressing violence against women - let's take action," based on discussions undertaken by the Committee and developed in association with many different partners.

Dance was chosen to evoke physical and mental violence indirectly in a video, which it is hoped, will become viral, thanks to #ViolencesFemmesJagis.  This video will be broadcast on the social media networks of the Prince's Government and Monaco Info, and publicised via posters in the city and in the local press.

This dance was performed by Alessandra Tognoloni, with choreography by and directed by Marguerite Ferreira Boffa.

The sports sector is also committed to defending the cause of women.  For example, Saša Obradović, the Roca Team's Coach, Dee Bost, the Team's Playmaker, Yakuba Ouattara and Oleksiy Yefimov, Executive Director, took part in the campaign, recording a message of support in their mother tongue.

In addition, interactive theatre performances, resulting from a partnership with the Soroptimist Club of Monaco, will be given at the Princess Grace Theatre:

These shows, which are a new innovation in the Principality, offer an educational approach to the subject of violence by involving the audience, who thus become "spect'Actors."

The Principality of Monaco has been associated with this international day for several years.  The aim of the day is to highlight the importance of preventing violence and addressing it through the measures put in place by the Government and by Monegasque associations.

Twenty-six cases of violence against women were recorded in Monaco in 2019 by the Police Department, mainly concerning persons residing in the Principality.  More than half the cases involved physical violence and a quarter of the cases sexual violence.* 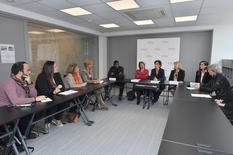