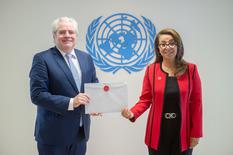 During the meeting which followed, Ms Ghada Fathi Waly thanked the Principality of Monaco for its longstanding support to UNODC’s technical assistance programmes, and welcomed the forthcoming conclusion of a funding agreement for the Global Programme against Money Laundering, Proceeds of Crime and the Financing of Terrorism (GPML). Through this, the Principality of Monaco will provide support to help build the capacities of Central African nations (Congo, Democratic Republic of the Congo, Chad, Cameroon, Central African Republic) to counter money laundering and the financing of organised crime, terrorism and violent extremism.

For his part, H.E. Mr Lorenzo Ravano praised the valuable work being done by UNODC at a pivotal moment, marked by heightened global tension.

He also reiterated the Principality’s support for the organisation’s technical assistance programmes, including the GPML, and welcomed the collaboration between UNODC and Monaco’s SICCFIN on combatting money laundering and terrorist financing.

* Founded in 1997, UNODC is at the forefront of global efforts to combat illegal drugs and transnational crime. UNODC takes action to raise public awareness of the dangers of drugs and strengthen international efforts to combat the illegal production and trafficking of drugs, as well as the associated criminality. The organisation also works to improve crime prevention and help reform the justice system to strengthen the rule of law, promote stable, viable criminal justice systems, and combat the growing threats posed by transnational organised crime and corruption.

** UNOV was established on 1 January 1980 as the third United Nations headquarters after New York and Geneva. It fulfils representation and liaison functions with permanent missions to the United Nations (Vienna), the host Government, and intergovernmental and non-governmental organisations in Vienna.