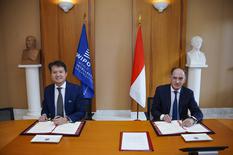 Mr Daren Tang, Director General of the World Intellectual Property Organization (WIPO),1 paid a working visit to the Principality on 2 and 3 November 2022.

The Director General, accompanied by two colleagues (Mr Habip Asan, Director of the Division for Transition and Developed Countries, and Mr Victor Vazquez, Head of Section for the Coordination of Developed Countries), had an audience with H.S.H. the Sovereign Prince and attended a working lunch organised by H.E. the Minister of State.

In one of the visit’s highlights, Mr Tang signed a memorandum of understanding with Mr Jean Castellini, Minister of Finance and Economy, intended to set out more clearly the areas of cooperation between the Prince’s Government and this United Nations specialist agency. These include opportunities for citizens of Monaco, who will soon be able to make use of the WIPO’s Digital Access Service and distance learning tools. Ms Isabelle Berro-Amadeï, Minister of Foreign Affairs, and representatives from the Ministry of the Interior also took part in the discussions.

During the visit, the WIPO delegation, accompanied by H.E. Ms Carole Lanteri, Ambassador and Monaco’s Permanent Representative to the organisation, and Mr Gilles Realini, Counsellor and Deputy Permanent Representative at the Principality’s Permanent Mission to the Office of the United Nations in Geneva, visited the Intellectual Property Section of the Business Development Agency and the Digital Transition Office, and met various stakeholders from the private sector, including innovative start-ups resident at the MonacoTech incubator. They also toured the Monaco Scientific Centre and Oceanographic Museum. 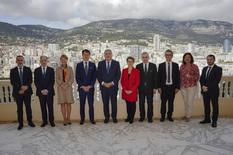 This was the first time that a Director General of the WIPO has visited the Principality. It demonstrated the excellent relationship between the leading international organisation in the field of intellectual property and the Principality of Monaco, which has been a WIPO member state since 1975. The visit was also particularly timely since the Principality is preparing to modernise its legislation on intellectual property to enhance the country’s attractiveness and offer an environment conducive to the setting up and development of innovative businesses in Monaco.

1. The World Intellectual Property Organization (WIPO), a specialist institution of the United Nations, was created in 1967 following the conclusion of the WIPO Convention, which established it. It has 193 member states and is headquartered in Geneva. Its mission is to lead the development of a balanced and effective international intellectual property system that enables innovation and creativity for the benefit of society.