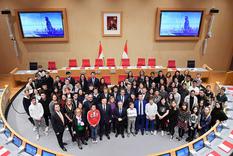 Images from the concert given by Kungs last summer at the Sporting Monte-Carlo still fill the minds of the Principality’s young people. This was the first MC Summer Concert organised at the initiative of the National Council, and its success was unanimously hailed by the audience as well as the organisers: the Prince’s Government, the National Council and Monaco City Hall.

Keen to repeat this youth-focused music event as soon as possible, a date was fixed (1 July 2020) and a venue chosen (Espace Léo Ferré). Just like last year, young people themselves have chosen the star who will headline the MC Summer Concert 2020, through a vote held at the Principality’s schools and colleges in October.

All that remained was to reveal the name of the headliner for the second MC Summer Concert... and on Tuesday 3 December, the waiting was finally over as an announcement was made in the National Council auditorium, in the presence of class representatives, President of the National Council Stéphane Valeri, Minister of the Interior Patrice Cellario and Mayor of Monaco Georges Marsan.

It will be Alan Walker, the 22-year-old Anglo-Norwegian artist and one of the most popular performers in the world right now, with billions of views and downloads on the various platforms to his name, who will take to the stage on 1 July next year.

The MC Summer Concert is free and exclusively for young Monegasque nationals, residents, and those who study in the Principality, aged between 13 and 25.

The next step is to select the local artists who will feature as support acts for the concert.

Preparations for the Reopening of Schools are Gathering Pace