The Economic and Social Council Makes a Commitment to Energy Transition 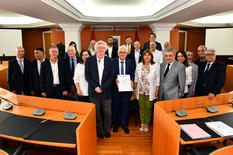 A ceremony was held today at the Economic and Social Council (CES) for the signature of the National Pact on Energy Transition by the President of the Assembly, André Garino, in the presence of the Minister of Public Works, the Environment and Urban Development, Marie-Pierre Gramaglia.  The aim for the Institution is to commit to a low-carbon Monaco.

As a reminder, the CES is an Assembly that is consulted by the Government on matters relating to the social and economic life of the country, and which also expresses wishes that are transmitted to the Government.  The CES, whose President is appointed by the Sovereign Prince, is comprised of 36 voluntary members from civil society.

You will find some images on our social networks and on the Monaco Info TV news from this evening at 7 p.m.