Today at the Grimaldi Forum, a signing ceremony for the National Energy Transition Pact was held, bringing together the managers and “green teams” of all of the Principality’s hotels. The aim was to remind them of the Pact’s objectives and to gain their support for the push to achieve a low-carbon Monaco.

During a speech, Jean-Luc Nguyen, Director of the Energy Transition Mission, and Guy Antognelli, Deputy Director of the Tourist and Convention Authority, reiterated the vital importance of this project, advocated and led by the Sovereign Prince. Stressing that these signatures were part of their DNA and entirely in keeping with their actions, they welcomed the hotels’ dynamic approach, motivation and, more broadly, commitment within the Principality and abroad. The multiplier effect of the “Green Is the New Glam” campaign launched last November by the Tourist and Convention Authority has also made a significant contribution to making Monaco a genuinely “green” destination. Each hotel manager then noted how honoured and delighted they were to be participating in the signing ceremony.

The tourism sector, whose actions extend over the long term, is critical to the energy transition effort. Today’s signature, a symbol of the hotels’ environmental legacy, is part of a continuing commitment which dates back more than a decade in some cases. A vast majority of hotels have held ISO 14001, Green Globe, Planet 21 and other certifications for a number of years. They focus on issues which are key to energy transition: waste management, transport issues and, above all, empowering customers. 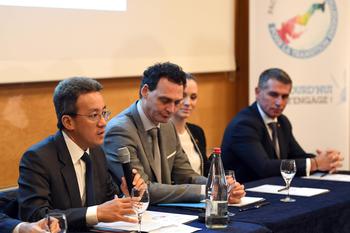