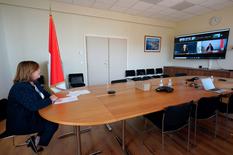 The Principality of Monaco, represented by Marie-Pierre Gramaglia, Minister of Public Works, the Environment and Urban Development, took part in the Summit on Climate on Friday afternoon. The summit brought together representatives from some 60 countries across two days.

In her speech, delivered virtually, Marie-Pierre Gramaglia noted the increase in the greenhouse gas emissions reduction target announced by the Sovereign Prince in December last year: a cut of 55% compared with 1990 (up from a previous target of 50%) and carbon neutrality by 2050.

The Minister explained that the Government’s action was focused on the three areas that cause significant emissions in Monaco: transport, waste and energy consumption by buildings.

Marie-Pierre Gramaglia highlighted the Principality’s commitments to support developing countries, the least developed countries and small island developing states, who are among the first victims of climate change.

She noted the Sovereign Prince’s decision to regularly increase the climate funding granted by the Principality of Monaco over the coming years.

New online service to support businesses in their Energy Transition

Mission for Energy Transition and waste reduction: vote for the best Monegasque initiative!