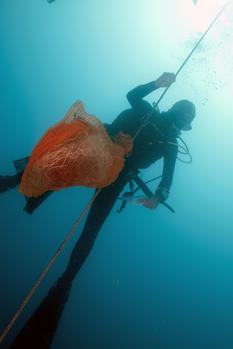 In 2016, a highly unusual mortality event affecting noble pen shells was observed on the Spanish coast. By the end of 2018, it had spread to French, Monegasque and Italian waters. With assistance from numerous local institutions and working together with a network of international stakeholders, the Prince’s Government is launching a series of actions to save the species. An experimental project to capture noble pen shell larvae has been in operation since June, and this will be followed by an attempt to breed the shells with the ultimate aim of reintroducing individual specimens back into the sea.

According to a report[1] by the International Union for Conservation of Nature (IUCN), a parasite which infects the digestive glands of noble pen shells is believed to prevent them from feeding correctly, and so they die from hunger. At the end of last year, survey dives were carried out in Monegasque waters by the Department of the Environment, in close cooperation with the Monegasque Association for the Protection of Nature (AMPN) and a network of Spanish and French scientists. Among other things, these resulted in attempts to transplant individual shells deeper into the sea where the parasite appears to be less active due to the colder water temperature. Unfortunately, these attempts proved unsuccessful and to date, of the more than one thousand noble pen shells which populated the Larvotto Reserve a year ago, only a few have been spotted alive since spring.

Since June, the Department of the Environment and the Institute of Oceanography have been implementing a protocol that seeks to capture noble pen shells at the larval stage as they are swept along by the Ligurian current. The larvae are the subject of an experimental breeding project designed to reintroduce the shells to their natural environment, making it possible to study their level of resistance in Monegasque waters. Five lines equipped with 12 collection bags (two lines at the foot of the Oceanographic Museum and three in the Larvotto Marine Reserve) have already been installed by divers from the Department of the Environment, the Institute of Oceanography, the Institut de la Mer de Villefranche, the University of Nice and the AMPN. The mesh size of the bags optimises the chances of capturing larvae in the current. The bags will be brought back up to the surface in September and October, and examined carefully. If larvae measuring at least two centimetres have been captured, they will be housed in a tank in the new Monaco Marine Life Rescue Centre (CMSEM) at the Oceanographic Museum for around a year. There, they will be able to grow under close surveillance, until they become large enough to be reintroduced into their natural environment. Conceived and designed to play a role in conservation initiatives and marine biodiversity research, the new CMSEM began operating in April, and will be mobilised to help find solutions to these mortality events.

Given the scale of the phenomenon, as well as the experimental nature of the operation, it is essential that this initiative is a joint effort, allowing the work to be pooled and a Mediterranean-wide network to take action. At the instigation of the Department of the Environment, numerous institutions have therefore been mobilised to take part in this noble pen shell research and conservation programme, including the Prince Albert II Foundation, Monaco Scientific Centre, the Institute of Oceanography (Albert I, Prince of Monaco Foundation), the Paul Ricard Oceanography Institute, the Institut de la Mer de Villefranche, the University of Nice Sophia Antipolis and the AMPN, which has long helped to monitor the noble pen shell population in Larvotto. This network, which will help to advance understanding of the mortality event, extends beyond the borders of Monaco and France, with a number of stakeholders from Spain and Italy involved as well.

Since 2016, the Prince Albert II Foundation has also supported the Pinna SPOT programme, led by the Kotor Institute of Marine Biology (Montenegro) with partners from France (Paul Ricard Institute) and Spain. The programme aims to draw up an inventory of populations of the species, and to study their living conditions and genetic development. Noble pen shells in the Kotor region seem to be more resistant to the outbreak, and so it is possible that solutions could be found by comparing different locations in the Mediterranean and sharing the experiences of various partners. Over the coming months, the Principality of Monaco will play an active role in promoting regional cooperation.

1 Report of the Working Group Meeting on the Mass Mortality Event of the Pen Shell Pinna nobilis and the Emergency Response, IUCN, 2018

THE NOBLE PEN SHELL (Pinna nobilis) is a type of shellfish found in the Mediterranean, Atlantic, English Channel and North Sea. It is the largest bivalve mollusc in the Mediterranean, and one of the biggest in the world, able to reach up to a metre in length, sometimes even more. The noble pen shell was long exploited for its byssus: a bundle of filaments which it secretes and which were used to make clothes, and its shell was also used to produce buttons. The species, which has been protected in France since 1992, has suffered a spate of deaths in the Mediterranean Sea since 2016. These deaths appear to have been caused by a parasitic virus that is believed to infect the pen shell’s digestive system. The shell then dies, as it is unable to feed itself properly.

THE LARVAL STAGE is the very first stage in the development of a species. Depending on the species, several different larval stages can occur in series. Once it has completed its development, which in the case of the pen shell takes place in open water, and the process of transformation, the larva will establish itself in the sediment and become a breeding adult.