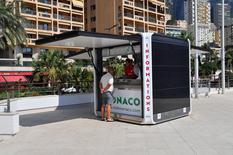 This summer, as part of its sustainability policy, the Principality's Tourist and Convention Authority is trialling a seasonal tourist information office that is powered exclusively by solar energy.  This innovative kiosk has been installed on the forecourt of the Grimaldi Forum, where it will remain for two months.

It should be recalled that, in order to reach the population and tourists as closely as possible, Monaco Tourist and Convention Authority is setting up five information kiosks to complement the two permanent information points in the Boulevard des Moulins and the SNCF railway station during the summer season.  If this first trial is satisfactory, it is planned to increase the number of these new-look kiosks from 2020.

Once its solar panels are opened out, this Austrian-made solar kiosk, known as the Cubox or KSA, occupies a floor area of 12.50 m2.  It has been rented from a distributor based in Villefranche-sur-Mer, the Serco Holding company.  It operates within a second after it is opened, including a fridge and a fan, with no connection.  It charges even in the absence of sunlight, and has unlimited autonomy.  Ten minutes of sunlight are enough to charge one hour of battery life.  Finally, the Cubox produces enough energy to meet the consumption of a family of four.