MonaBike : the new electric bike sharing scheme in the Principality 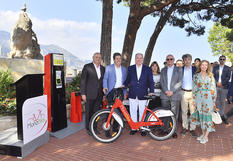 On Friday 12 July, H.S.H. Prince Albert II officially launched MonaBike, the new electric bike sharing scheme in the Principality and the latest step in promoting soft mobility. The scheme aims to encourage cycling in the Principality, to improve coverage within the country, and to increase the capacity of the existing bike stations.

The launch was attended by Serge Telle, Minister of State, Marie-Pierre Gramaglia, Minister of Public Works, the Environment and Urban Development, Stéphane Valeri, President of the National Council, Roland de Rechniewski, Director of the Monegasque Bus Company (CAM), and a number of other personalities including Tristan-Emmanuel Landry, Counsellor for the Canadian Embassy in Monaco.

Thanks to close collaboration between the Prince’s Government and CAM, which manages the service, from Saturday 13 July the electric bike sharing scheme will offer 300 bikes from 32 bike stations, compared with around 100 bikes from 17 stations previously. With the introduction of a smartphone app, the service, which remains available to regular subscribers, can now also be accessed by people who are just visiting the Principality.

The roll-out also includes the installation of five bike stations within the Principality’s public car parks and, from September, the first to be introduced beyond Monaco’s borders, with three stations in the town of Beausoleil, opening up an opportunity to extend the service to other neighbouring communities.

Canadian company PBSC Urban Solutions was selected to provide the new service, adding the Monegasque fleet to its total of 80,000 bikes in 35 cities from Australia to the US, Mexico, the UK, Spain and France.

More reporting can be found on Monaco Info and social media.