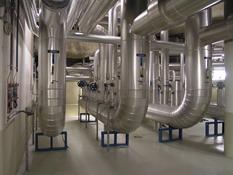 New energy regulations were adopted last year in response to the Principality’s ambitious objectives for reducing its greenhouse gas emissions and improving energy efficiency in buildings.

The regulations focus first on strengthening energy performance requirements for new buildings and renovation projects, and second on introducing, from 2022, both a ban on the use of fuel oil in all buildings and an obligation to conduct energy audits for buildings constructed between 1930 and 1990.

As part of efforts to support these new regulations, the Department of the Environment is now calculating and publishing, on an annual basis, the CO2 emissions and percentage of renewable energy produced by each heating and cooling system in the Principality.

Monaco’s public and private heating and cooling systems are powered by seawater heat pumps. The energy produced is more than 80% renewable, as shown by the 2018 results published by Ministerial Decree, and the levels of greenhouse gases emitted are extremely low.

This is Monegasque expertise which has been developed over more than 50 years and is still relevant today, with two new systems being introduced in the Condamine and Larvotto districts in light of the fuel oil ban.

The public data is essential to support both energy audits and the thermal studies required for building construction or renovation.

In terms of the Principality’s urban planning, the data will feed into the energy survey produced as part of the Climate Air Energy Plan 2030 developed by the Department of the Environment and associated monitoring.