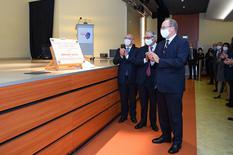 Following the establishment of the Committee at the Oceanographic Museum in January 2019 and the unveiling of the centenary logo at the Yacht Club de Monaco in July of the same year, the Albert I–2022 Committee has continued its work in another symbolic memorial location: Lycée Albert I. The 19 October 2020 event was a third key opportunity to mark the launch of commemorations and present to the public the programme of forthcoming celebrations.

The event held at Lycée Albert I on 19 October 2020, attended by H.S.H. Prince Albert II of Monaco, began with the presentation of the centenary trailer, produced for the Committee by the Audiovisual Institute.

H.E. Mr Robert Fillon, the President of the Prince Albert I Commemoration Committees, then unveiled the highlights already planned to commemorate Prince Albert I. These celebrations will take place over the next two years, from late 2020 to late 2022.

The Committee’s website, www.princealbert1.mc , which is being steadily enhanced to become a genuine documentary portal, was also unveiled, along with social media coverage, notably a Facebook page that is regularly updated with facts and images linking current affairs to Prince Albert I’s era.

A former student at the École Normale Supérieure who passed the high-level competitive examination for teachers in philosophy, Prince Albert I appointed him to teach philosophy at the Lycée de Monaco exactly 100 years ago. Armand Lunel won the first Prix Renaudot in 1926 for his novel Nicolo-Peccavi ou l’Affaire Dreyfus à Carpentras (Nicolo-Peccavi or the Dreyfus Affair in Carpentras). He symbolises the fate of the Monegasque Jewish community during the Second World War.

Monaco’s Department of Education was keen to pay tribute to his personality and his work this year, by naming the multipurpose hall at Lycée Albert I after him.
H.S.H. the Sovereign Prince unveiled a commemorative plaque dedicated to the author, in the presence of his family and Jean-Yves Giraudon, President of the PEN Club, an association founded by Armand Lunel in 1968. Mr Stéphane Lamotte, a teacher at Lycée Albert I who also passed the high-level competitive examination, holds a doctorate in history, acts as Secretary for the Commemoration Committees and has authored a study of Lunel and Monaco which was published in the Annales monégasques in 2017, gave a presentation on Lunel’s time in the Principality.

Finally, a historical lecture on the Dreyfus Affair connected the various elements of the evening together.

From 1897, in correspondence with his friend Flore Singer, a Parisian salon host, Prince Albert I showed himself to be sympathetic to Dreyfus from the outset of the Dreyfus Affair; in a meeting with President Félix Faure, he tried, unsuccessfully, to persuade Faure of Dreyfus’ innocence. In February 1898, in response to Zola’s “J’Accuse” letter, he wrote to the author: “Your statement contains the most wonderful sentiments that a soul could express. It honours humanity, it adds a ray of light to the glory of France. For all those who admire independence and sincerity in patriotism, you have risen higher than the renown of your talent.” On 3 July 1899, the Prince had a letter published in Le Figaro which was dated 27 June in Kiel and addressed to Madame Lucie Dreyfus, and he wrote to the captain. His public stance evoked a passionate response from both camps.

This commitment illustrates Prince Albert I’s humanism. He believed that achieving justice for Dreyfus could only help to improve relations between France and Germany.

The lecture was given by Mr Vincent Duclert, a historian and academic (researcher at the École des hautes études en sciences sociales (EHESS) and associate professor at Sciences-Po) who specialises in the Dreyfus Affair, on which he wrote his PhD thesis, focusing on the involvement of scholars. He has authored a number of reference works, including a biography of Captain Dreyfus, Alfred Dreyfus. L’honneur d’un patriote (Alfred Dreyfus: The Honour of a Patriot), published by Fayard in 2006.

First meeting of the Environment Council