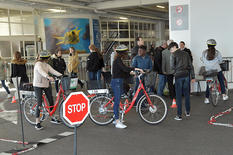 The event, which was held today in the Parking des Pêcheurs car park, featured a presentation of all types of electric transport, including scooters, electric bikes, cars and go-karts. A road safety workshop led by the Police Department was also available for young people likely to ride “two-wheelers”.

In addition to the chance to try out the electric vehicles, the aim of the day was to raise pupils’ awareness of the need to look after the environment by limiting the pollution caused by urban transport, and of the concept of multimodal transport. In preparation for the day, all Year 9 pupils took part in a lesson focused on these topics.

Following this awareness initiative, the pupils were invited to take part in the Jeun’Elec Competition for the academic year 2017–2018, by putting together a photo collage and creating a logo on the subject of electric transport.

The prize ceremony will take place during the EVER Forum on Wednesday 11 April, in the presence of His Serene Highness Prince Albert II.