Combating Plastics in Monaco: On 1 January, Plastic Cotton Buds, Cups, Cutlery and Plates will be Banned 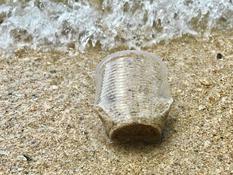 On 1 January 2020, disposable plastic cotton buds, cups, cutlery and plates will be banned in the Principality.  This ban follows on from the ban on single-use plastic bags in 2016 and plastic straws and stirrers (mixers) in January 2019.

Marie-Pierre Gramaglia, Minister of Environmental Affairs, Public Works and Urban Development, emphasised that, "In the Principality, we are resolutely committed to an approach that aims to ban all single-use plastics.  This is self-evident, in view of the impacts and dangers that plastics represent for the environment, particularly for marine fauna, given that the vast majority of plastic micro-waste is discharged into the sea."

The Minister added, "Combating single-use plastics also means reducing the greenhouse gases that are generated by their manufacture, transport and disposal.  These concerns, which combine protecting biodiversity with climate change and improved quality of life, are central to the activities of the Ministry of Public Works, the Environment and Urban Development."

In 2016, faced with an urgent need to take action, the Government established a Waste Prevention and Management Plan for Monaco, with a view to implementing a "Zero Single-Use Plastic Waste by 2030" policy.

This aim, which is ambitious in terms of European policies, can be achieved through the implementation of regulatory provisions and an action plan to support the various stakeholders in implementing these obligations and ensuring that everyone involved adheres to these obligations.

In this spirit, the Principality took part in the European Week for Waste Reduction this year for the first time - 60 stakeholders were involved in holding awareness-raising activities aimed at their employees, customers, at children and the general public on this subject.

As major players in these changes, retailers and restaurant owners will be given specific support.

From 2020, the "Responsible Trading" label will be accompanied by "Responsible Restaurant" certification, which will help restaurateurs find substitutes for prohibited items and adapt their practices.

The support measures include technical factsheets on disposable straws and tableware.  These factsheets, which will be distributed at the beginning of the year, highlight authorised materials and recommended practices.  They will also cover single-use items that are not yet restricted, such as plastic bottles and food containers.

In this way, the Principality is adopting an ambitious, coherent policy on single-use plastics, by implementing measures in parallel with this action plan, such as strengthening the team of waste-sorting ambassadors and expanding and simplifying waste-sorting instructions.

Similarly, disposable plastic cups have been replaced by reusable and returnable alternatives that can be washed on site at major events in the country.

Valérie Davenet, Director of the Environment, pointed out that "our concern is to act quickly while supporting those involved and offering alternatives that are primarily reusable.  Scientists from the IPCC and IPBES are alerting us to the risks involved if we don't change our behaviour and lifestyles without delay".

It is estimated that almost 1,800 billion pieces of plastic waste are polluting the oceans.  What is known as "the 7th continent" is constantly expanding in the Pacific and has a surface area equivalent to three times that of France.  This is considerable.

According to the WWF, 600,000 tonnes of plastics are dumped in the Mediterranean every year.

In Monaco, incineration of plastic waste represents approximately 15% of tonnages and 88% of the GHG emissions from their incineration.

Nature Weekend in the Principality’s gardens

Inventory of groupers and brown meagres along Principality’s coastline