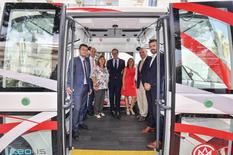 The Principality of Monaco is taking another step towards implementation of its “Smart Principality” concept, developed by the #ExtendedMonaco programme: a self-driving electric shuttle is now operating on the Rocher, providing a service for residents and tourists.

A press conference to present this experimental new mode of transport, decorated in the colours of Monaco, was held on Thursday 4 July at the Ministry of State. Marie-Pierre Gramaglia, Minister of Public Works, the Environment and Urban Development, and Frédéric Genta, Country Chief Digital Officer, set out the broad outlines of this experiment, which is fully in line with the Prince’s Government’s transport policy. They were joined by Jean Castellini, Minister of Finance and Economy, Séverine Canis-Froidefond, Director of Forward Studies, Urban Planning and Mobility, and Christophe Pierre, Director of the Smart Nation Department.

“The aim of this experiment is, eventually, to reduce the use of personal cars, develop public transport, and promote soft forms of mobility. We are entering into a period of learning about this transport of the future,” said Marie-Pierre Gramaglia as she introduced the new initiative. “If the experiment is successful, we will be going ahead with the development of this mode of transport, which could offer a solution to address the shortage of night buses, which is due to cost, or to serve areas in which the city buses cannot operate.”

For his part, Frédéric Genta reiterated that, “inevitably, over both the short and medium terms, the transport of tomorrow will be driverless. Primarily for reasons of road safety: these shuttles do not drink, they don’t break the speed limit and they won’t cut in front of other vehicles. But they will also help with parking congestion and will reduce the costs associated with introducing new services.” He concluded: “At this point, the shuttle around the Rocher is not a revolution, but it is nonetheless part of a vital evolution for the development of the transport of the future.”

Introduction of One-Way Traffic in the Boulevard du Larvotto