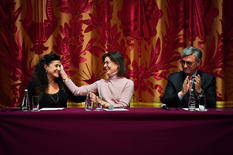 At a press conference in Salle Garnier on Tuesday 3 December, H.R.H. the Princess of Hanover, Chair of the Monte-Carlo Opera Board of Directors, made an important announcement: Cecilia Bartoli will take over from Jean-Louis Grinda as director of the Monegasque institution on 1 January 2023.

“In March 2019, Jean-Louis Grinda informed Me and H.S.H. the Sovereign Prince of his intention to eventually leave his post as director of the Monte-Carlo Opera. Having occupied this position since July 2007, he felt that, in all good conscience, the time had come to hand over to someone who would bring new ideas to opera in the Principality.

Jean-Louis Grinda then mentioned the name of Cecilia Bartoli, whom he had informally consulted. In addition to her personal and professional qualities, Cecilia already has strong ties to the Principality, having led the Musicians of the Prince as artistic director since the ensemble was established in 2016.

This attractive proposition naturally caught my interest and attention as Chair of the Opera’s Board of Directors. After receiving the agreement of H.S.H. the Sovereign Prince, a proposal was officially made to Cecilia Bartoli which, I am delighted to say, she accepted,” said Her Royal Highness.

Cecilia Bartoli will thus become the first woman to lead the Monte-Carlo Opera. She will also stay on as director of the Musicians of the Prince. “Cecilia Bartoli will, of course, be free to pursue her exceptional career as a singer, just as Jean-Louis Grinda has been free to work as a stage director,” concluded the Chair of the Board of Directors.

“This is a great honour and an enormous responsibility, and I would like to thank H.S.H. the Sovereign Prince, H.R.H. the Princess of Hanover and the Opera’s Board of Directors from the bottom of my heart for their confidence in me. Thank you also to Jean-Louis Grinda for his friendship, for having thought of me, and for his promise to continue to make himself available to me and to the Opera as an advisor,” responded an emotional Cecilia Bartoli, who was keen to reiterate her commitment to the Principality and to stress the role it has played in her career: “I made my debut in Monte-Carlo in The Barber of Seville in 1989, right at the very start of my career, and I have felt an attachment to Monaco ever since. Salle Garnier is probably one of the most beautiful opera houses in the world. Its dimensions and acoustics are perfect – a real gem... In 2016, Jean-Louis Grinda and I established the Musicians of the Prince. In no time at all, the orchestra had appeared in more than 70 concerts, recordings and opera productions all over Europe. It received universal acclaim from international audiences and critics, and was described as one ‘of the best period instrumental ensembles’, introducing Monaco to major classical music audiences...”

The diva finished by commenting with enthusiasm on the future that now awaits her: “Taking on the leadership of the Monte-Carlo Opera is a new phase in this career, but it also represents the realisation of a dream. I will be the first woman to occupy this position, as well as the first opera singer since Guy Grinda, Jean-Louis Grinda’s father. This is a perfect illustration of my motto: ‘Draw on tradition and bring innovation!’ As on my first day, I’m brimming with ideas and will take tremendous joy in placing my creativity and passion for music at the service of the Monte-Carlo Opera!” Cecilia Bartoli now has three years to prepare calmly for her first season.