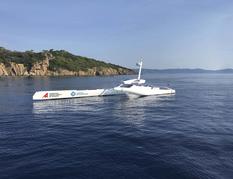 A better understanding of the behaviour of marine mammals and the threats they face is one of the major ocean protection issues to which the Principality of Monaco is committed.  With this in mind, a mission to study the movements of various Mediterranean species is being supported by Monaco Explorations (Société des Explorations de Monaco) and the Prince Albert II Foundation. This mission, which is also supported by the Agreement on the Conservation of Cetaceans of the Black Sea, Mediterranean Sea and Contiguous Atlantic Area (ACCOBAMS) focuses on cetaceans that can dive deep into submarine canyons - sperm whales, Cuvier whales and Risso's dolphins.  It will use two large surface drones of approximately 20 metres long, which will travel more than 2,200 kilometres (1,367 miles) on the Ligurian current from mid-September to mid-December.  From Toulon to Genoa, via Corsica and the Balearic Islands, these autonomous laboratory craft will record the acoustic signals emitted by cetaceans, as well as noise pollution caused by human activities.  There will be a stopover in Monaco at the start of the mission in late September, and another in mid-December, at the end of this project.

The mission is coordinated by Bertrand de Lesquen, director of the journal Marine & Océans, and is under the operational direction of Fabien de Varenne, designer of the Sphyrna drones, and the scientific direction of Professor Hervé Glotin of the University of Toulon.  Ten or so scientists will take turns on board a catamaran that will accompany the drones, to ensure that the mission runs smoothly, and will analyse the data collected over the course of the three-month mission.

The drones are equipped with several high-performance hydrophones that enable marine mammals to be located in 3D over a radius of 6 kilometres (3.7 miles) and at a depth of up to 2,000 metres (1.2 miles).  These drones have made it possible to undertake such a project for the very first time - no "mobile" study has ever been carried out over such a large area.

The drones are innovative, autonomous and eco-friendly, and represent a bright future for marine scientific expeditions.  You can find out more about them in the press kit (attached) and, from 20 September to 23 September, in Saint-Tropez, at the International Sustainable Mobility Meetings (Rencontres internationales de la mobilité durable).

29 May 2020 Press release
2019 Sphyrna Odyssey Mission in the Mediterranean - from 20 September to 20 December
Contact us
http://en.gouv.mc/A-la-Une-du-Portail/2019-Sphyrna-Odyssey-Mission-in-the-Mediterranean-from-20-September-to-20-December