Mgr Bernard Barsi bids farewell to the Diocese of Monaco 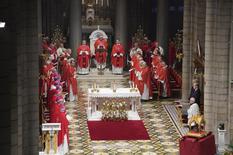 On Monday 27 January 2020, Mgr Bernard Barsi, Archbishop of Monaco, presided over the Pontifical Mass for St. Devota, in the presence of T.S.H. Prince Albert II and Princess Charlene as well as numerous ecclesiastical, civil and military personalities. Afterwards, he bid his farewell to the Diocese of Monaco and thanked God for the blessings received during his episcopacy.

Before the blessing, Mgr Barsi gave a moving speech in which he recalled “Your Highness, the late lamented Prince Rainier III, Your father, welcomed me here in October 2000. Appointing me Grand Chaplain of his Palace by Sovereign Ordinance, He brought me even closer to your family, whom I have supported through times of sorrow and joy.”

A reception was then held at the Oceanographic Museum of Monaco, during which H.S.H. the Sovereign Prince thanked the Archbishop “with all my heart, on behalf of myself, my family and the entire Christian community in Monaco, for these twenty years of episcopal priesthood.”

Having been appointed Apostolic Administrator, Mgr Barsi will continue his ministry until his successor, Mgr Dominique-Marie David takes canonical possession of the office of the archbishop.

“We will be back here together on 8 March 2020, since in a kind and significant gesture of apostolic succession, Mgr David has asked me to ordain him as bishop,” Mgr Barsi concluded in his message of thanks.

This year marks the fiftieth anniversary of Mgr Bernard Barsi’s priesthood. Originally from Nice, he began his apostolate in the Haute Vallée de la Tinée region. He was then appointed to the Vocations Service at the St. Paul Centre in Nice, where he spent 10 years working with young people, before becoming a parish priest in the Vallée du Paillon and then Curate-General for the Diocese of Nice. Having served as Archbishop of Monaco since 16 May 2000, Mgr Barsi has taken part in the key events that have occurred in Monaco over the last two decades.