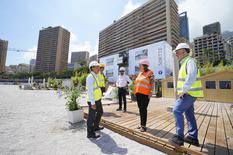 The Minister of Public Works, the Environment and Urban Development visited Larvotto beach during late morning on Tuesday 30 June, in advance of its opening to the public. During her visit, the Minister stressed that “the fact that the beach is opening in several days is a testament to the efforts of all the teams that continued to work during the lockdown, while strictly complying with health measures. I want to thank them.”

She continued: “The reason we wanted to keep this site going despite calling a halt to public construction projects was that we were certain that, as they emerged from lockdown, Monegasque nationals and residents would delight in rediscovering high-quality, accessible and pleasant public spaces.”

As planned, the beach will be open to the public from Saturday 4 July to Sunday 13 September. Opening hours will be 7 a.m. to 8 p.m. during July and August, and 8 a.m. to 7 p.m. during September. Officers from the Marine and Airport Police Division will monitor the beach and the water. The Department of the Environment will monitor the quality of the water for swimming, as it does every year during the summer season.

From Avenue Princesse Grace, the resort can be accessed by means of a safe walkway above the construction site and then descending via a lift or staircase, one to enter and the other to exit, thus ensuring separation between the flow of users. The health measures that will apply are those decreed by the Department of Health and Social Affairs for shops, bars, restaurants and public lifts. Social distancing will be in place on the beach.

To create a pleasant space, the fencing that separates the beach from the construction site has been decorated and the Department of Urban Amenities has improved the look of the area by installing nearly 80 plants. On a practical level, temporary toilet and shower facilities will be accessible, including for people with reduced mobility.

There will be two outlets where visitors can get something to eat: the Palais du Maillot de Bain will be selling snacks, and the Miami will offer a brasserie/casual fine dining option.

To protect the beach from the swell, geotubes, which are sacks made from geotextiles and filled with sand, have been installed in the two coves to create a wall stretching from the seabed up to a metre above the water and, as is the case every year, a jellyfish net will be put in place.

The car park will remain open with reduced capacity and a single access ramp.

Construction work will continue behind the fence throughout the summer with the aim of fully opening the beach and shops in summer 2021.