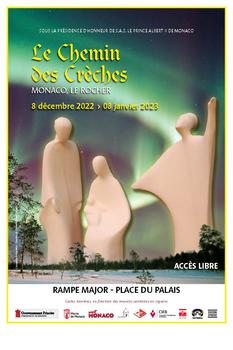 True to the Christmas tradition, Monaco’s Nativity Trail will be opened on 8 December with a blessing by the Archbishop of Monaco, Mgr Dominique-Marie David, during the Procession of the Immaculate Conception. Some sixty nativity scenes of all sizes will line a route along the Rampe Major and the Rocher (see attached map).

The Grand Chalet, on Place du Palais, will pay tribute to Prince Albert I, in a year which has commemorated the centenary of his death. Like a vessel navigating through the snows of Spitsbergen, the chalet’s decoration will be reminiscent of the interior of a ship, recalling the Prince’s voyages and expeditions. Small nativity scenes from the various countries he visited will also be on display.

Near the Statue of the Sea, the nativity scene presented by the National Committee for Monegasque Traditions was commissioned in the early nineteenth century from Antoine Simon, the master nativity scene craftsman from Aubagne, and includes 25 figures and the baby Jesus. This piece of the Principality’s heritage has been fully restored and is a jewel in the crown of nativity scenes.

The Monaco Nativity Trail Association is organising a day of festive educational events for children, incorporating creative workshops and a big game to be played on the trail. This will be held on Sunday 11 December from 11 am to 4 pm, on Place de la Statue de la Mer, in partnership with the Department of Urban Amenities, the Palace authorities, the FAR Association, the Scouts of Monaco and the Collège Charles III choir.